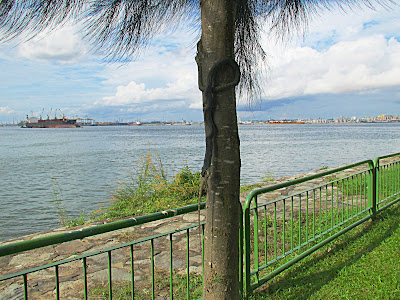 The Mayan predicted apocalypse ended without any fanfare and had people greeting each other on Facebook “Happy End of the World Day!” 2012 was finally ended and another year has passed. It was a memorable year indeed and it has brought so much joy and challenges to my life. And guess what I found on New Years Day at Punggol Beach when we went for biking…yes 2013 is the year of the SNAKE! :-) 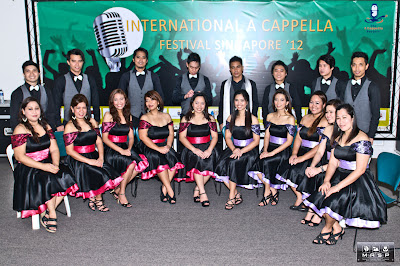 This is my second time to perform on this annual a cappela festival with VocaBlends last October 13, 2012 at Fort Canning – Black Box Theater. It was fun as always, enjoying each new song, our Meastro Earl had taught us. We have improved well after performing many times in front of the stage. Though, this year, the concert venue was quite small and could accommodate only 100 persons inside. The venue was grander in SOTA last October 2011 where we performed for the first time in this said event. However, as performers, we did our best to entertain our friends and families who watched the show.

Vocal Weekend Show at Esplanade Concourse
Last December 8 to 9, our group VocaBlends performed at Esplanade Concourse. This was a dream come true for VocaBlends, considering that Esplanade is a world class and renowned theater where most of popular artist around the world performs. It was not the concert hall yet however performing in the free concourse venue, is already great honor for any amateur performing groups. It was a thrilling experience to be in the Esplanade Dressing Room knowing that some of the popular artist has been in this room before us. The event was memorable also, because it was the first time we have performed Vocal Pop songs, different from the usual choral arrangements we performed. It just felt so good when you perform and hearing he applause afterwards. It may not be my best performance, but I was happy about it. The video below was when we I sung Jason Mraz "Im Yours" with Vocablends providing the a cappella background. We also performed Telephone, Somebody That I used to Know, Change the World, Nobody and Seasons of Love.

5th PinoySG Badminton Open 2012
This tournament was quite memorable to me though I have been an officer of PinoySG Badminton club since 2007, because this is the first time I was leading that annual tournament as their Club President. It was very successful indeed as we introduced the Challenge Cup trophy which was awarded to the badminton who garnered the most number of wins in the 2 days event. I did not win any trophy but the success of the event was more than enough recognition for me and my team of officers who worked so hard to make it a successful event. I also got reelected for another 2nd term as their Club President and which is a first in the history of the club since 2007 and after 4 Presidents that served the group. Another highlight is when PinoySG Badminton Club was featured in Lianhe Zaobao local newspaper here in Singapore. I have kept the newspaper clip though it was written in Chinese. 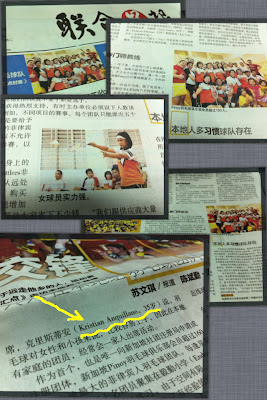 Badminton is my favorite sport, though I still missed the adrenaline pumping paintball games I used to have. Hopefully, time will come that it would not be that expensive and restrictive in terms of buying your own gear, so that sport may flourish. Since 2007, where I was part of the founding members of the club, I have always rallied to make our membership open to everyone. So for the last 5 years, we were the known club who accepts beginners and intermediate players alike. It is just my personal way of giving back the joy I had when I first play the sport here in Singapore. It is also one way of helping our Filipino OFW's here cope up with homesickness and loneliness they felt being away from their families. So it is my rule that everyone is welcome to join the club even if the don't even know how to hold a racket for the first time. I am proud that for the last 5 years, we have been instrumental in the growth of Filipino badminton community here in Singapore. The newbies have improved and some even created their own competitive badminton groups. Some have become the best groups in the competition, but knowing they all started in our club, is enough for us to feel pride of what they have turn to. 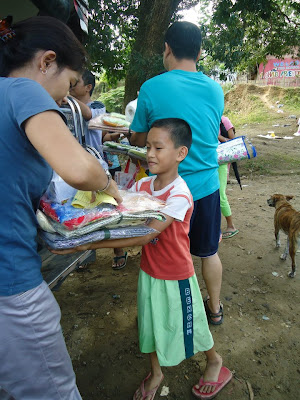 I am not really that “big time” engineer here in Singapore when it come to salary, so I never had more than enough to share. I had my first calling in helping others when a flash flood struck my hometown which is Cagayan de Oro City. I rallied all my groups to raise funds for all the victims who died that time. I personally visited the location with all the donations I got from the fund we raised from our Filipino badminton community. It was devastating and tragic, especially the children who were left behind by their parents killed in the flash floods. It was the first time that I really put all my efforts in leading the donation drive to help. Then, I realized that in my own little way, I could help. I have been a leader since I was high school, and I just realized that this may be the reason why I lead. So I may be able to help others by creating awareness. BisdakSG had been also a big part of the donation drive, where we remitted all the donations through Xavier University to help in their evacuation efforts that time.

Typhoon Habagat in Manila
The typhoon has brought thousands of evacuees when Manila was flooded. Together with our Filipino badminton community, we lead a badminton game where we collect voluntary game fee from the players. We remitted the money to Red Cross Philippines to assist in their evacuation and relief efforts. 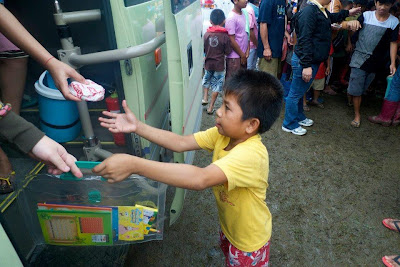 Together with my officers in BisdakSG, we raised funds to help the victims of floods and landslides in Davao Oriental and Compostela Valley, Mindanao. Hundreds have died and buried alive because of that disaster.It was as worst as what happened in Cagayan De Oro Coty but we were surprised that it was not given enough exposure in the media. We never had that much response when co founder Bernie Mantos decided to donate a big chunk of his personal income from his business. So from that amount we were able to share enough money to buy school supplies and food for the victims of the typhoon after the holiday season.

Yes, I may have grown matured by each passing year, I guess. With my family joining me here in Singapore after 6 long years, I have felt more calm and happy nowadays. I am very thankful for that reason. My experience with VocaBlends was a blessing and being able to serve others through my badminton club and BisdakSG, was enriching and self fulfilling. As time passes by, I just realized that what matters in life really is what you want to do and how you find joy on it. It does not matter how people would looked at you, or how they would want to know you. The best gift in life is your personal happiness and knowing that you have done well in spite of your misgivings and mistakes. Each one of us is capable of doing great things, no matter how small it is. A simple act of kindness will go a long way. The joy of looking at someone who was enjoying your song performance. The smile you brought to a person after a tiring and perspiring game of badminton. In serving others, we should know that we cannot please everyone. I too had gain haters along the way perhaps because of jealousy, or it is just their attitude. But as I have said, haters are born to challenge and to test you. They are there for a purpose, so that you would know how strong you are when face with adversity.  As my favorite saying to my badminton club, "KEEP THE FLAME BURNING!!". It means to keep your passion alive, live life and cherish all the memorable moments.

Posted by Speed at 4:35 PM 3 comments: Links to this post