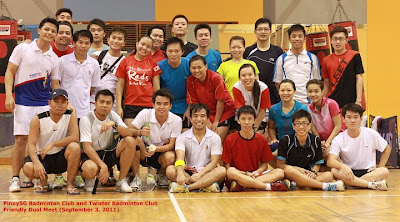 Last September 3, 2011 at Clementi Sports Hall, PinoySG badminton Club met with the popular and very strong local Singaporean team of Twister Badminton Club. The “Twisters” is a local group who were widely known for their skills in badminton community. They were usually seen in Jurong East Sports and Recreation Center every Tuesday and Friday evening.  Their members are multi racial, who are mostly from Singapore, Malaysia, Indonesia, China, etc.
Twister Badminton Club is under the leadership of Lydia Tan and Boon Ng Oon. They have a thread in Badminton Central forum where you could invite them for fun matches. They are bunch of smiling "twisters" whose speed in court corresponds with their hospitality in their home court.

The game started at 6:15pm, with PSGBC Tourney head Brenda Vistan and Vice President Nino Amores preparing the game and lineup for both groups. All players were in a very warm disposition as both leaders from PSGBC and Twisters welcomed the players.  First game was started and the Twister did not fail our expectations as their players were quite strong and very fast. Intense smashes and sharp drop shots were exchange but the Twisters were dominant in most of the games.


This game as initiated by PinoySG Badminton Club is aim to develop friendship and harmony with different races in Singapore through Badminton. This program was started last 2009 with the club playing against Badminton Mates and Lion Badminton Group(Clementi).

With a lot of Filipinos playing badminton sport nowadays, it is the objective of the leaders to use this sport as a medium for harmony with different races here in Singapore. 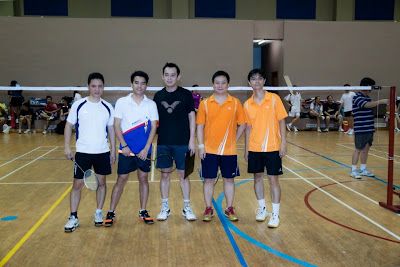 Last May 2012,  PSGBC Badmintoneros, arranged another 2 legs of friendly game with Chua Chu Kang Group lead by Clifford, which is composed of recreational players from Singapore, Indonesia, Malaysia and China. Game 1 was played at Chua Chu Kang Sports Hall, the home court of the CCK players. It was a tough game and CCK was able to win most of the games. Game 2 was then played at Endeavour Primary School, home court of PSGBC. This time we have some guest players from other Filipino badminton groups. We were able to secure enough wins but by the end of the day, CCK team still has the highest number of wins. 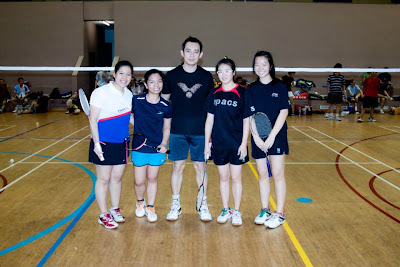 Another fun and fulfilling experience, as we made new friends with other nationalities through badminton sport. This is a very nice way of initiating friendship and camaraderie among local and foreigners here in Singapore.

One very nice lesson learned indeed is that we were ONE in having fun. When the shuttlecock is on play,  each one of us is bound by similar excitement and passion.

We were badminton shuttlers and we speak ONE language at court…BADMINTON. Long live the sport and the players. 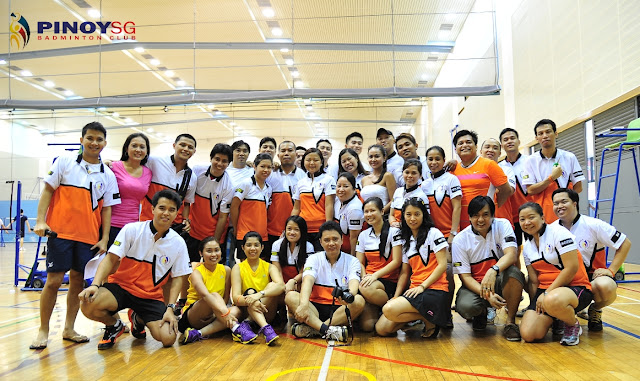 The most prestigious, anticipated and awaited all Filipino annual badminton open ended with a big bang last June 9 to 10, 2012 at Jurong West Sports and Recreation Center. The crowd roared and cheered their respective teams amidst the sweltering heat inside the huge sports hall.

There were 12 different badminton groups who came to compete for the events in Singles, Mens Doubles, Womens Doubles and Mixed Doubles category. The players were divided into 3 different levels of skills, in which Level A as the highest and followed by Level B and Level C. 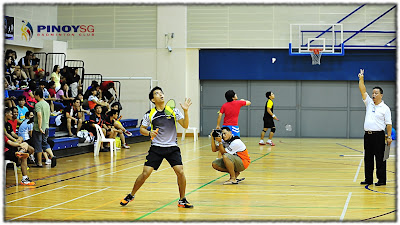 The two day event ended with Pinoy Shuttlers winning the Challenge Cup. The challenge cup was awarded to the team who garnered the highest points for the overall player performance, attendance, discipline and sportsmanship. PinoySG Badminton Club captured the coveted Best Support Group, as the team with the most number of cheerers and supporters.

Trophies and cash prizes were given to the winner on the last day of the event. The championship singles event was played by both veteran players, Jeremy Maniago and David Batalla. The game ended with Jeremy taking the last match point, successfully defending his Singles title last year. Level B Singles Finals saw Mark Canillo conquering Joshua Batula in the 3rd set. 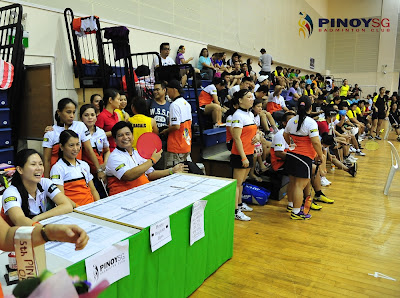 The last game for Mixed Doubles Level A Finals was another high intensity match in which Jeremy Maniago with new partner Andrea Tongco against the PSG Open 2011 defending mixed doubles champion last year, Roland Amores and Armhi Sumalinog. Nino chose to change his usual aggressive attacking strategy by adopting a very slow pace game, opting for more pushes and drops shots at the midcourt. The game ended after 2 sets with Roland Amores and Armhi Sumalinog still undefeated at Mixed Doubles.

PinoySG Badminton Open started last 2007 and initially started with few competitors from the Filipino badminton community. After a year, the competitors dramatically increased after private companies started supporting the event and the organizer, PinoySG Badminton Club. 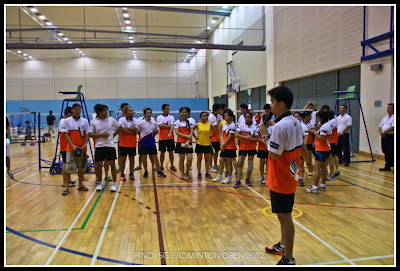 PinoySG Badminton Club is the first Filipino badminton club in Singapore which was registered with Registry of Society of Singapore last 2008. For 5 years, the group has initiated several badminton friendly games among the Filipino community and as well with other local Singaporean badminton groups. The group is currently under the leadership of club’s co-founder and current President Kristian A. Anquillano with his top officers, Roland Amores as Vice President, Victoria Jane Parot as the secretary and Dr. Lira Dumaguing as the treasurer. As a registered society, PinoySG Badminton Club is governed by their By Laws and Constitution and has to submit an Annual Returns to the Registry of Society of Singapore.

PinoySG Badminton Club would like to thank the whole Filipino badminton community of Singapore for their participation, BAGONG BAYANI (Modern Day Hero) magazine as our official media partner and Singapore Badminton Association umpires.

Posted by Speed at 11:48 AM No comments: Links to this post