My Papa, My Hero and Our Tatay 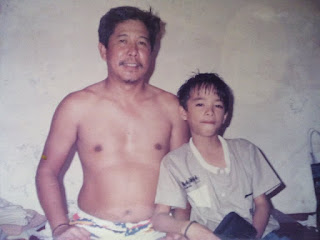 It was late evening in December, when I had my last conversation with Papa. He was eating pineapple and was telling me about a palm plantation in Malaysia. It was a weird topic coming from him, but it was quite expected since he got sick. I am pretty sure he read about it before, because indeed Malaysia has one of the biggest palm plantation in the world. Then I went offline, before midnight, I called my Mama again because I noticed there was a missed call in my Facebook messenger. I talked to her and I and my family said our goodnight to Papa as well. That was the last time I talked to him alive...he left us early morning of Dec 9, 2014.

He had not accomplished that much in the society to be remembered and honored. He never achieved so much to be admired. However, in my childhood he was my HERO. He was my inspiration. He was the reason why I insisted to become an engineer even I was having difficulty with Mathematics. Today December, 09, 2015 is his 1st death anniversary and I would like to honor him by writing my memories of him.

A PATIENT MAN
The most patient man I have ever known. He was not the story teller type of father, and most of the stories I knew were all snippets of anecdotes from my Mama and relatives. He loves children so much, that he would passed as Santa Claus by his size and kindness. He was never a disciplinarian and always the one protecting us whenever we got punished. We would have grown as spoiled brats if not for my mother. I still remember clearly, whenever my sisters got whipped and punish, he would cover them with his body and usually end up being the hit instead. He seldom speak about his personal life or give advice. He sat, listened and spoke only when asked.

HE IS KIND
I remember one day, he came home with a small boy. He said he found him in the streets and is helping him as a “konduktor” of the jeep he was driving. He brought the boy home and fed him. Papa was like that, very unreasonable and trusting especially to kids. I don’t remember what happened to that boy afterwards. I remember stories about him from my grandmother, that whenever he arrived in his hometown from the city, he would bring a lot of candies for the children of their barangay. The children would run and meet him.

HE CURSED
Whenever a child was being punished in our neighborhood, he cursed us and would not stop walking around our house. He hated the sound of a screaming kid who is being whipped by their parents. He despised it. He loves to curse whenever he wants something to be done quickly. But in spite of his cursing, many who assisted him in his electrical projects learned a lot from him. And to think of it, he never taught me. Perhaps, he cannot afford to curse me on the job.

HE SMOKED
Papa is a cigarette addict. He can finished a pack of cigarette in a day and I would know if he was already home because I can smell the smoke. One of the reasons why I don’t smoke. Cigarette was his greatest comfort whenever he was stressed or tired. One time, we were trying to scare him about the effect of smoking. We ended up laughing, because he replied that he won’t get sick of smoking because he drinks a lot of water.

THE REAL DEAL ENGINEER
He finished only high school and never went to college, but I was always in awe with his electrical and electronics skills. He can repair the smallest transistor radio up to a huge truck. Until now I still don’t know how he had done it. I never got his skills when I graduated from engineering. I was much better in talking and teaching. I had a better technical understanding but not really in hands on skills. He was the real deal. If he had finished a degree, I wonder what would he accomplished. I can still remember the number of appliances brought to our home for repair. He would even pick up appliances in the garbage and make it work again.

A GOOD MANONG
He was the eldest in the family and I remember that he was known not to keep ill feelings towards his siblings. No matter how they fought, he would always come and visit them whenever he has the time. He always loved his sisters and brothers. It is just sad that he never saw them again before he died. He had always missed them.

A SUPERMAN
When I was a kid, I can still remember how proud I am whenever he will bring his hand-made fishing gun to the sea and come back carrying a lot of fishes and seashells. I have always been amazed with his talent in diving undersea and catching fish with his bare hands. He was my Aquaman and Superman combined.

HIS ULTIMATE REGRET
The only time I saw him really cried when my grandfather died. He cried for days. It was the time where we all really in the midst of crisis. I was reviewing for my engineering board examination, and he was struggling to take care of Tatay Paking.

MEMORABLE GIFT
We never had so much before, and we are always struggling with poverty but there is one gift from him that I would never forget. It was the moment that has never fade in my memory. It was a fine day when he came home with a shiny BMX bike. That was my happiest moment and it is just funny because he never taught me how to ride a bike afterwards. I learned it myself after several bruises in my ankle.

HE WAS A SIMPLE MAN
He has his flaws and shortcomings. He was just a simple man with extraordinary adventures.I grow up knowing that I have a father who will always protect me. I would have never been complete without him in my childhood. My memories of him holding me when I was a kid, his laughter and smile, his big appetite, his pride when I told him I passed the board, his loud fart and his extraordinary patience would always stay with me as long as I live. He may not have been very verbal about it, but I know that he loved us so much. He loved my Mama and my sisters. He may not be perfect but he tried his best. He may have become moody when he got weak and sickly, but we always remember him as a silent man.

A GOOD COOK
Definitely one of the best cook I have known. I still remember him during my childhood days in Punta Cruz, when he was usually asked to cook for huge feast for wedding, fiesta and even funerals. His big belly was a sight to see as he would taste the dishes. It was like watching Santa Claus cooking for us. He was a character to see and I can still remember how proud I am.


I only hope that in his lifetime, I had made him proud. He never talks about his feelings and he was not expressive with his appreciation. He knows how I loved him, and I did try my best to take care of him in spite of my daily struggles from afar. I never got his patience, and I do hope one day when I grow old, my children would love me as much as I loved him. I am writing this blog, so if there is any one who knew him by name, someone out there who may have been his colleague or his friend in the past. He is Policarpio Ventures Anquillano. He was my FATHER and I am proud to be his SON.
Posted by Speed at 1:44 AM 1 comment: Links to this post